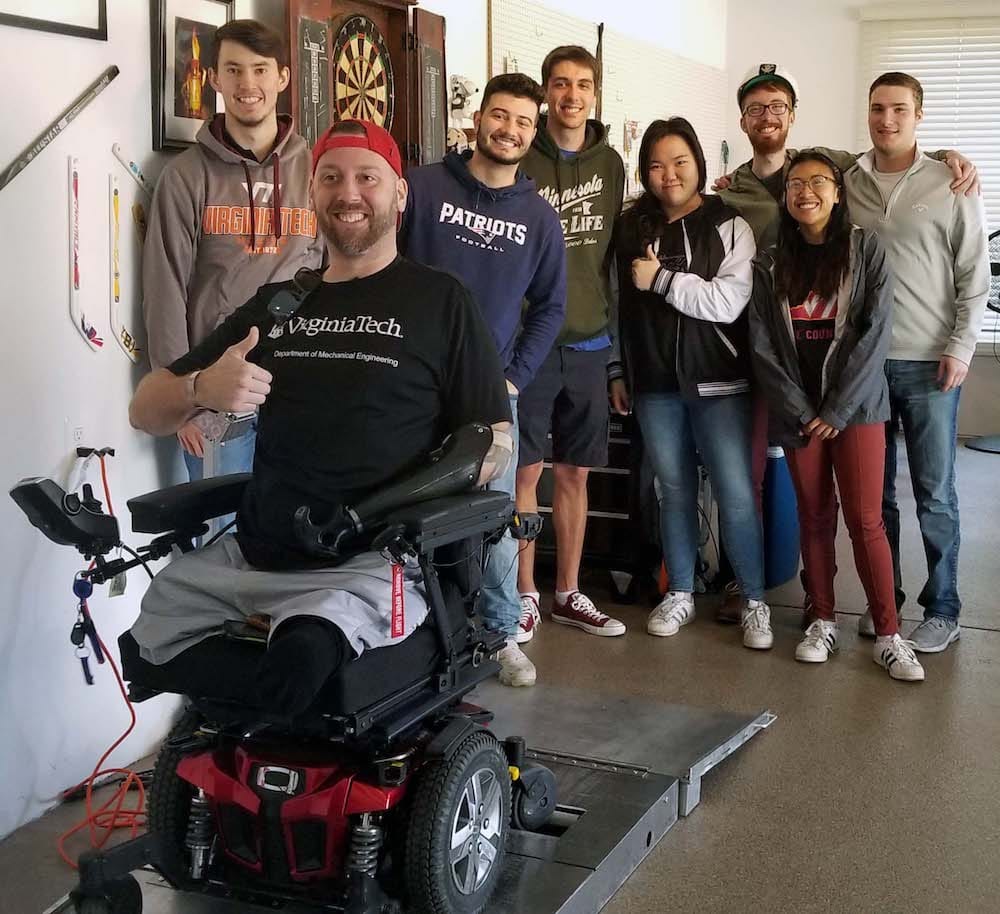 Virginia Tech takes a hands-on, engaging approach to education, preparing scholars to be leaders in their fields and communities. As the Commonwealth of Virginia’s most comprehensive university and research institution, Virginia Tech offers 250 undergraduate and graduate degree programs serving over 33,000 students. Through a combination of its three missions of learning, discovery, and engagement, Virginia Tech continually strives to accomplish its motto Ut Prosim (That I May Serve).

A 10-year Army Veteran was paralyzed in a horseback riding accident in 2005. She is a very handy person who loves to work on projects in and outside her home, to include gardening, carpentry, working on cars, etc. She currently “hangs” over her wheelchair to do any work close to the ground, which can cause back, neck, and shoulder pain or injuries. Her other option is to transfer from the wheelchair to the ground, but then she is stationary and has to drag her body across the ground, which has caused skin breakdown, splinters, etc. She requests a functionally adapted creeper to safely work at ground level on various projects inside and outside her home.

A 10-year Army Veteran was paralyzed in a horseback riding accident in 2005. She is a very handy person who loves to work on projects in and outside her home, to include gardening, carpentry, working on cars, etc. She currently “hangs” over her wheelchair to do any work close to the ground, which can cause back, neck, and shoulder pain or injuries. Her other option is to transfer from the wheelchair to the ground, but then she is stationary and has to drag her body across the ground, which has caused skin breakdown, splinters, etc. She requests a functionally adapted creeper to safely work at ground level on various projects inside and outside her home. 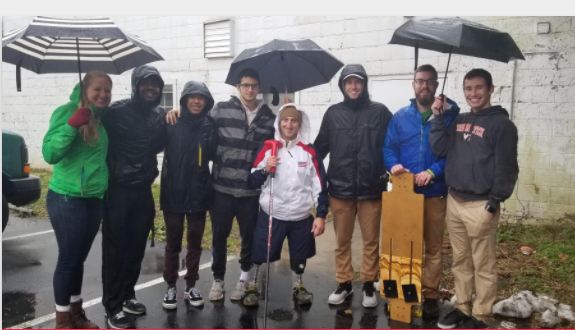 QL+ mechanical engineering students from Virginia Tech tackled the Spikeboard Challenge. QL+ Challenger, Rob Jones is a double, above the knee, amputee that is committed to pushing himself past any obstacle. Rob is a fellow Hokie that deployed to Iraq in 2008 with the Marine Corps. In 2010, he deployed to Afghanistan where his main role was to detect buried IEDs. Unfortunately, an IED exploded before he found it and he lost both of his legs in the incident. Rob has by no means let his condition limit him in any way. He won a bronze medal in the 2012 Paralympics as a tandem rower, ran 31 marathons in 31 days in 31 different cities, and he has also cycled across the United States of America.... 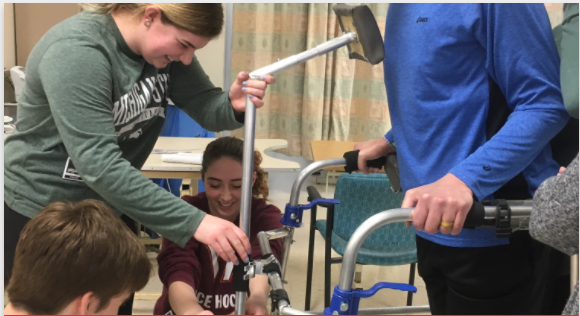 The project Challenger, Phil Swinford, is a retired U.S. Army Veteran and Virginia Tech Parent who experienced an injury while mountain biking with his son, who is a cadet at Virginia Tech.... 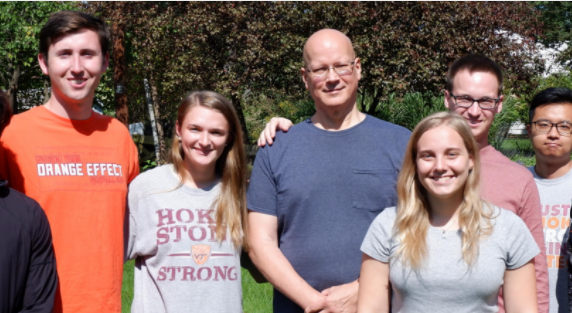 QL+ engineering students from Virginia Tech worked on the Spasticity Hand Brace for QL+ Challenger, Mark Dellinger. Mark is a retired US Air Force Sergeant who had a stroke in 2015. The stroke resulted in limited mobility on the right side of Mark’s body. He has regained some mobility but is still affected by a condition known as spasticity in his right wrist and hand. Spasticity is characterized by continually contracting muscles. This condition makes it nearly impossible for Mark to voluntarily open his hand, causing difficulty in performing daily tasks such as cleaning and cooking.... 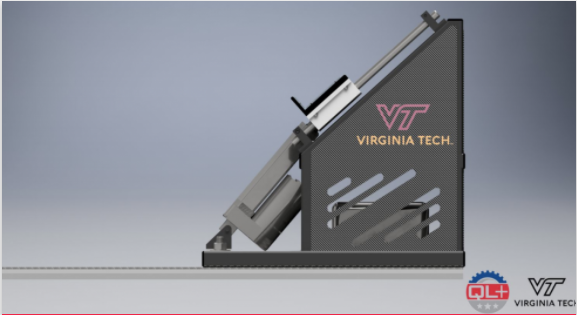 QL+ engineering students from Virginia Tech were tasked with the Challenge of creating a Wheelchair Tire Change Device for QL+ Challenger and Army Veteran, Tammy Landeen. Tammy was involved in a horseback riding accident that resulted in the loss of her leg function. She lives in Maine and is an avid outdoors person. Tammy depends on others to help her change out her wheelchair wheels whenever they get dirty from outside activity. She challenged this team to design a device that would allow her to be more independent and improve her quality of life.... 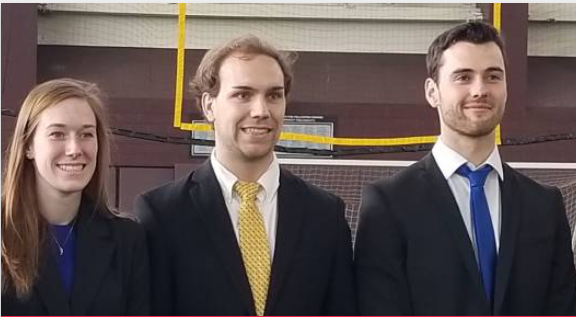 Dawn is a retired Army Captain who was injured in Iraq in 2004 when a rocket-propelled grenade went through her Jeep. This resulted in the loss of her right arm and shoulder. Dawn is a very active person and is a fitness enthusiast. She loves to work out with the assistance of her trainer. However, due to her injury, she is unable to perform exercises such as push-ups and planks. Attempts at these exercises result in the misuse of her muscles and could damage them or result in the uneven development of abdominal muscles.... 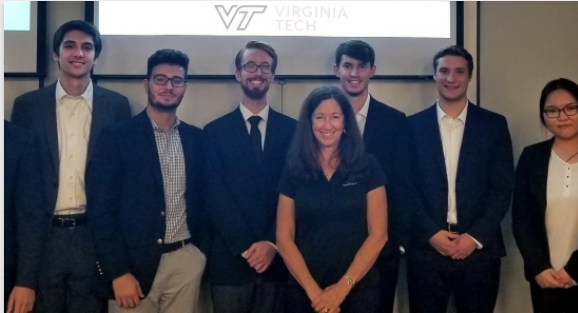 The objective of this Challenge was to create a device to effectively clean our Challenger's wheelchair tires before he enters his home. QL+ Challenger, Adam Keys, is an Army Veteran and triple amputee (bilateral above the knee and below the left elbow). Adam lives a very active lifestyle; most recently, he climbed Mt. Kilimanjaro and participated in the Chicago Marathon. He was recently named Military Times' Veteran of the Year for 2019.... 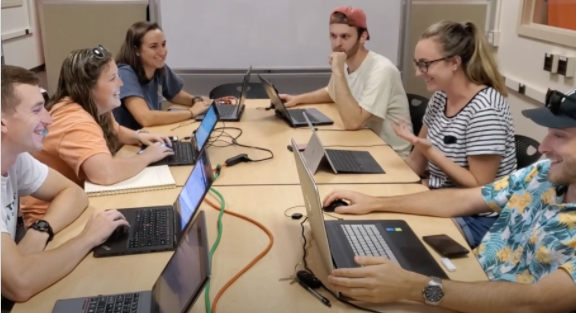 Adam Keys, 2019 Veteran of the Year, is frustrated by the dirt and debris tracked into his home via his wheelchair tires.... 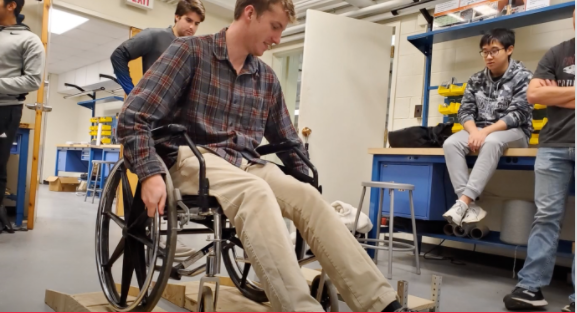 The wheelchair transfer device project was conducted for a QL+ client. The challenger for this specific project was Jeff Dolezal. Jeff served in the Air Force and was injured in a motorcycle wreck in 1980. The accident caused spinal damage and as a result, Jeff uses a manual wheelchair every day for mobility.... 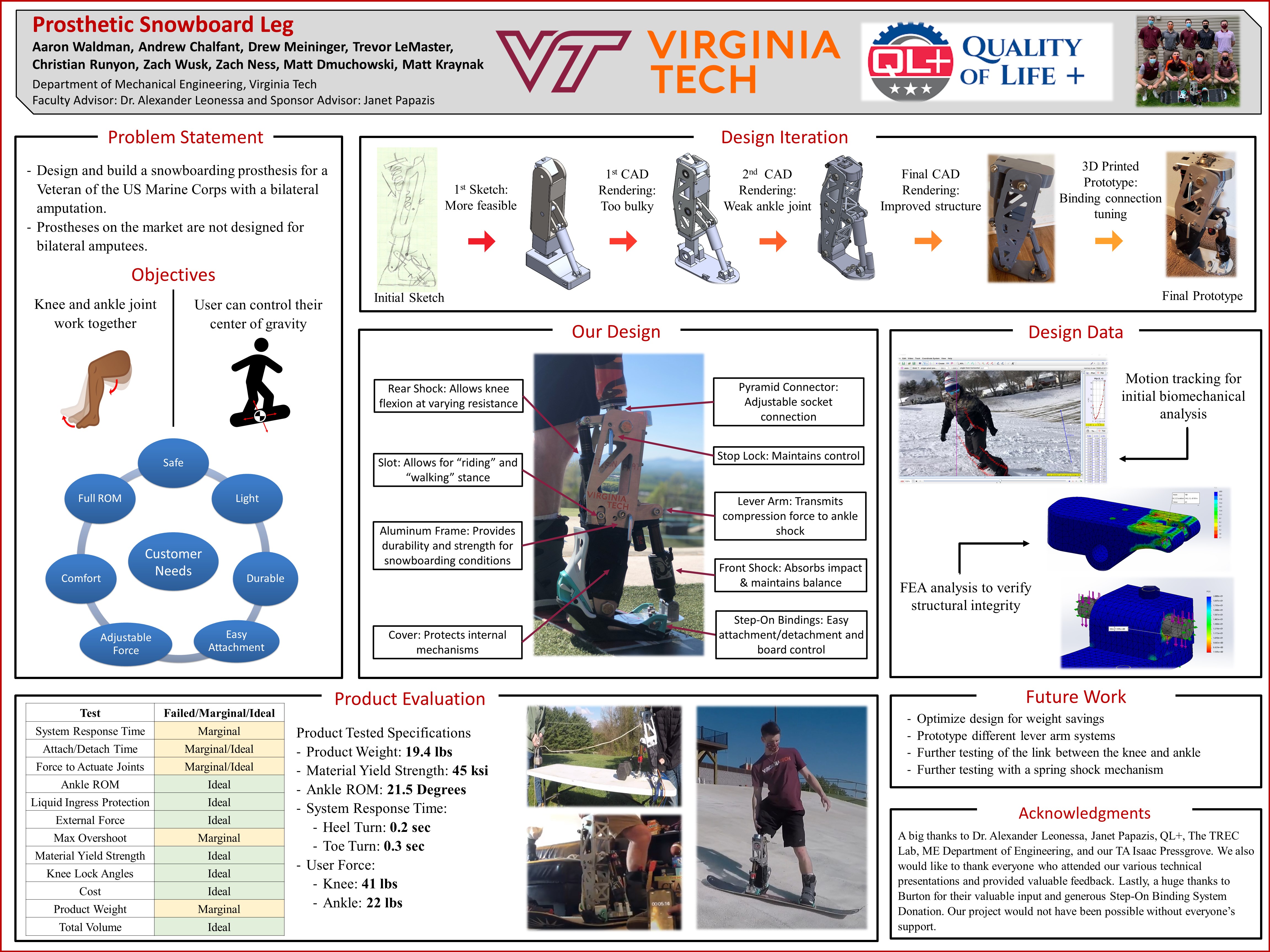 Our Challenger is a former Infantry Marine who works in motor cross with Ranger Road, an organization that helps Veterans in sporting activities. He was in an IED blast and injured his lower extremities. (Left Below the Knee Amputation, Right Above the Knee Amputation)He used to snowboard and would like to get back to it. He doesn’t think he will need assistance for his below the knee side. The issue is the above knee side, for which he has a very basic design for a leg that may solve the issue he sees that most "sport" legs don't address. The challenge is to create a functional, safe modified knee and ankle prosthetic for him to use to snowboard for recreation but that he can also use in his work with motorcross. 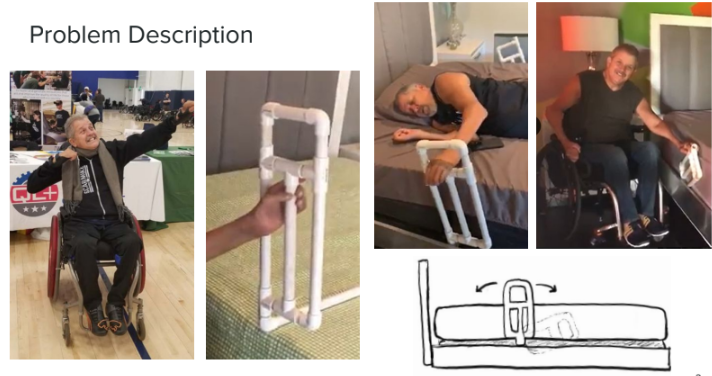 The Challenge is to design and build a functioning bed rail for home use.

Para-athletes that are part of the International Bobsleigh Skeleton Federation (IBSF) require an alternate starting method for the launch phase of a bobsled run. A current bobsled launcher exists to create an even push and start time, but this launcher is for competition use only. It is difficult to transport the competition launcher between training camps and it is too expensive to build multiple. The practice launcher should be easy to move and ship back and forth between the two American bobsled tracks; Lake Placid, NY and Park City, UT. To fill the need for a training launcher, the team partnered with Quality of Life + (QL+) to design and create a safe, cost effective, portable, and fully functional practice launcher to meet the customers’ needs. After generating multiple concepts, the team chose a design called “Matter of a Pinion.” This concept utilizes a motor to rotate a pinion that pushes forward a gear rack and actuating arm. To ensure the launcher would be able to provide enough force, calculations were performed. These analyses influenced the length of the pushing arm, pinion size, and motor selection. The actuating arm is made of a hollow square 2” x 2” x 0.125” Aluminum 6063 tube, with an electromagnet to attach to the back of the bobsled. The steel helical gear rack is attached to the top of the actuating arm. To propel the gear rack, a 1.5 inch pinion is rotated by a 5 horsepower motor. The motor can provide a speed of 1750 RPM with an accelerating torque of 180 in-lbs. A variable frequency drive controls the speed of the motor and communicates with the operator’s hand controller. The hand controller contains both a remote and dead man switch for safety. To ensure the gear rack fully resets between launches, limit switches were implemented. A welded Aluminum 6063 frame is covered by ABS paneling and weather stripping to protect all components. On the outside of the enclosure, there are handles and wheels for portability, as well as a height adjuster to ensure the launcher is level. After completing the design and build phases, the launcher was tested. The launcher meets 93% of the target specifications. Overall, the team is confident that the launcher will provide a launch similar to the competition launcher, and will enhance the para-athletes training and performance.

Thank you! Your submission has been received!
Oops! Something went wrong while submitting the form. Please try again.