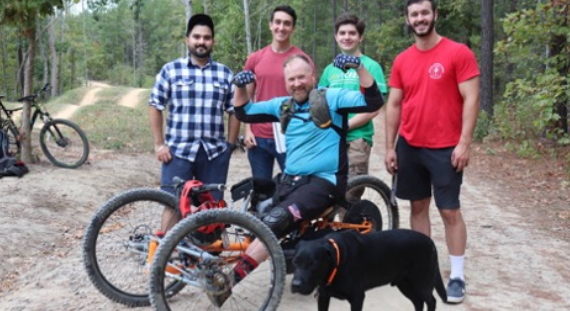 The George Mason University Handcycle Modification Team, also known as CHARIOT, was tasked with improving the comfort and performance of Army Major Peter Way’s handcycle. While deployed to Afghanistan, Major Way was injured which resulted in the amputation of his right leg.  He has a passion for sports, including riding a handcycle for long distances.  The largest sources of discomfort with his handcycle were the angle of the left knee tray, the mobility of the prosthetic cup, and the underpowered pedal-assist motor. These three grievances were the driving factors in the teams’ designs.

The team decided to proceed with a rack system that adjusts the knee tray and prosthetic cup. These racks were fabricated from Aluminum 7075 to minimize the added weight to the vehicle while maintaining high strength. The team decided to install the mid-drive motor in front of the vehicle. This more powerful motor replaced the existing rear wheel pedal-assist motor and allows the Challenger to ride longer with less fatigue. The motor was upgraded from 500W to 1600W which will allow the vehicle to travel up inclined planes at twice the previous maximum speed.  Finally, out of two initially considered saddle options, the team decided to fabricate more ergonomic design which, however, presented several manufacturing challenges due to its complex shape. The saddle was cast in fiberglass, padded with impact-resistant foam, and covered in a layer of marine vinyl to provide a tough, water-resistant covering.

To ensure that CHARIOT’s design would survive multiple years of use; a generalized dynamic analysis of the worst-case scenario for the handcycle was created to model the maximum possible acceleration that the handcycle may encounter. This maximum acceleration was applied to the handcycle in a point-mass analysis. The maximum force expected on the handcycle was then applied to each of the components of the stress and strain analysis using a Finite Element simulation. The results of the simulation showed minimal deflections for each of the parts, proving that the adjustment racks may have been overbuilt; however, the added weight was minimal due to our usage of aluminum.

With the new design, the weight of the handcycle is only increased by 4 lbs while drastically improving the power output of the motor by a factor of three.  With the better weight distribution of the saddle and the improved battery life, we envision the Challenger to comfortably ride for at least four continuous hours.

In conclusion, these modifications would help our challenger better pursue his passion for handcycling by allowing him to comfortably ride for longer periods of time. Since our improvements are adjustable; we envision that this system can be used as a model for other handcycle modifications to anyone in a similar situation to Major Way.

Congratulations, Team, for winning First Place out of 14 teams for your outstanding work!