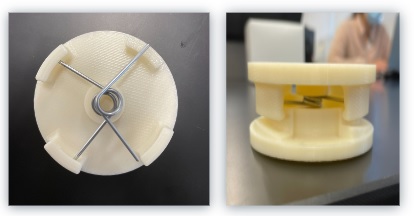 The breakaway for the prosthetic leg is being completed in accordance with the Quality of Life Plus (QL+) Program. The challenger for this project is Peter Way.  Peter is a retired Army Major who was injured in 2003, while serving, from a rocket-propelled grenade.  It injured his right leg. Due to shrapnel and dirt, he suffered multiple infections and underwent 24 surgeries. In 2015 he opted for a right leg-above-the-knee amputation. In February of 2019, he underwent osseointegration surgery. Peter has always been a very active person and enjoys mountain biking. The osseointegration surgery made mountain biking challenging and dangerous. A functional breakaway system needed to be created to disrupt the connection between his implant and the prosthetic, dispersing the forces that endanger his femur, making it possible for Peter to pursue mountain biking safely.

The device needed to break away due to compressive, tensile, bending, and torsional loads. Mechanisms were first designed to breakaway only from one of these forces.  Each new prototype was a refinement from previous prototypes and a combination of past iterations. To keep the design process moving, rapid prototyping was implemented. Eight prototypes were made on SolidWorks and five of those were 3D printed in ABS. Modifications were made to improve each prototype by testing how it functioned. Once the final prototype was designed, experimental testing began.

The final device will be located between the abutment and prosthetic. It successfully detaches into two pieces due to compressive, tensile, bending, and torsional loads. The use of a spring was implemented to provide damping. The final prototype has been printed by Markforged in 17-4 PH stainless steel. It will continue to be tested and refined.