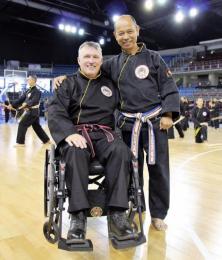 I joined the United States Marine Corps in 1975 and went active duty from 1977 – 1985 making  the rank of Sergeant. I served in rapid deployment. I became medically retired due to a parachuting accident,  being stabbed in the back, and having 30 surgeries from various other injuries. I attended college at Rochester Institute of Technology ,where I earned a degree to become a medical illustrator.

Growing up, I used to be a marathon runner, running in my hometown of Plattsburgh in upstate  New York and swimming one mile out to Boat Island in Lake Champlain and back again. I was  also an amateur body builder. I became proficient at Qwan Ki Do (QKD) – a  Vietnamese/Chinese kung fu. I am currently the Technical Director for the United States and  currently hold the rank of 5thdang.

Over the years my balance became worse which would make me fall and have concussions and  TBI. I fought for two years not wanting to use a wheelchair, but the continuous falls and  concussions warranted me being in one. I went through the “self-pity party” but decided either I can sit and be miserable or try to get out and enjoy life. After some years I chose the latter.  Since August 2018, I got off all my pain medications and use my biking and physical activities to release endorphins – the body’s natural pain killers.

In2017, Mindy, who worked through the Southern Nevada VA recreational therapy, told me  about trying to ride a bike to help with my circulation and also participate in shooting a rifle,  since I was always good at that. It wasn’t long before I earned my Distinguished Expert in rifle shooting.

Not having used my legs in a while, my muscles were weak and circulation was poor. I went to  Bunker Park (in Las Vegas) where other disabled veterans met to enjoy a bike ride together. At  first, I followed them in my electric wheelchair. Charlie, the ride leader, asked me if I could use  my arms and try the hand cycle. I tried it, but needing two shoulder replacements found it difficult to ride the bike using the hand cycle. Charlie asked if I could use my legs. Not wanting  to disappoint him and wanting to join the group, I said I could. So, Charlie put me in a  recumbent bike where I would use my feet to pedal the bike. I can’t walk due to the torn  ligaments in my ankles – but I gave it my all to pedal the bike. At first, I would push one leg  with one hand, then push the other leg. I was so proud to be able to ride the bike about 100 feet.

Fast forward two years and lots of bike training – I have competed in various biking events. My longest ride was participating in the Patriot Ride held in Palm Desert, CA. I rode 107 miles that  day. Other events I rode in is Mesquite Madness (Mesquite, NV) where toward the end of the  90 mile ride is 17 miles all uphill! But after completing that ride, I wanted to do the extra 10 miles to have another “century” under my belt. I’ve ridden in the Tour de St. George (UT) a  couple times,riding100 miles.

Riding a recumbent bike gives me the freedom to go many places I lack in a wheelchair.  And when being stopped at a red light, people in cars look over at me and tell me how cool that bike is. They don’t realize I am in a wheelchair – they just think it is some sort of different bike. Also, people treat me differently when they see me in the bike – as if I were “normal” and not  in a wheelchair.

In October 2019, I rode in the California Challenge, riding from Santa Cruz, CA, down Highway 1 through Big Sur and ending up in Malibu. That took place over a 6-dayperiod. There were  scheduled stops at grammar and middle schools where the children came out and waved  American flags and had posters of encouragement as we rode by.

The group gets a lot of support from local police who block roads so the riders can ride through  traffic situations. The California Highway Patrol helped guide the group through Big Sur waving traffic by the cyclists so everyone can ride safely. Riding gives me something to focus on, something to achieve, and something to believe in.

It was through the Far West Valor Games where I met a good friend Julius Schram who is an  ambassador to the Disabled Sports USA organization. He has since gotten me to participate in winter sports.

December 2019, I flew to Lake Placid, NY to participate in the USA Paralympic Bobsled/Skeleton event held at the Olympic Village. This was the first time ever riding on a  bobsled. I did pretty well so I went back January 27 –Feb 1sttoparticipate in the Empire State  Games. It was a lot of fun. January13-17, 2020, I participated in  Disabled Sports Eastern Sierra (DSES)Operation Mountain Freedom event at Mammoth Lakes, CA which consisted of mono skiing, bi-skiing, Nordic skiing and inner tubing– all skiing while sitting down. I’ve grown to love Nordic skiing so much that I also participated in the  DSES Nordic Camp at Mammoth Lakes, CA February 20-23, 2020. I was only home for a few days when I departed for Portland, ME to participate in the Veterans Adaptive Sports Training  (VAST) biathlon. Two things I love most –skiing and shooting.

On the home front, on November 9, 2019, I married my caregiver of three years – Andi. After  my divorce in 2012, I swore I would never get married again so I wouldn’t have to hear “I’m  tired of wheelchairs and service dogs”. That cut right to the core. But Andi was different. She knew how  to take care of a person in a wheelchair. If it wasn’t for her encouragement and taking me to all these events, I would be sitting in a corner somewhere not knowing what life can really be like. I owe a debt of gratitude to her for standing by me, encouraging me, supporting me, and just being therefor me. I must say this is the happiest I’ve been in a very longtime.

In our family we only have 4-legged children: 3 dogs and 3 cats. Parris is my service dog and  accompanies me to many of these events whenever possible. She is trained for voice and hand  commands. She turned four on December 13, 2020. I hope to have many more years of her loyal service.

While attending the winter sports event with the help of the DSES organization, a guest speaker  was Major General Ted Banta who currently serves as the Commander, Marine Corps  Installations Command, and Assistant Deputy Commandant for Installations and Logistics worldwide. It was he who gave Parris a meritorious promotion to sergeant in the Marine Corps.  I was so proud and honored to have Major General Banta give the promotion to Parris as the  orders were read by the Sergeant Major from Pickle Meadows, CA. And when he offered to  “shake hands” Parris lifted her paw for the General. She is one special girl and I don’t know  what I would do without her.

In September 2021, I attended a week long sailing camp in Galveston, TX. Having never sailed  before, I learned a lot about keel boat sailing and actually got my certification for keelboat sailing. That included knowing how to rig the boat, getting it ready to sail as well as an 80  question test on all aspects about sailing. The test not only included questions about parts of  the boat, rigging, etc. but also about windage situations, what side of the boat your sail is on  depending if you are heading upwind or down wind and right-of-way with other boats on the  water. I met a lot of new people who have become good friends.