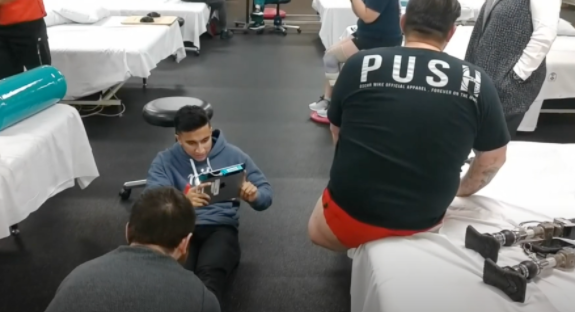 The creation of a waterproof osseointegration cover was designed for patients with amputations above the knee with osseointegration pegs that interface with the patient’s prosthetic limb. The cover will protect the exposed stoma and allow the patient to perform activities in the water at will, without having to expose the stoma to any chemicals or bacteria in the water or mud. The process involved several design iterations, however, the main problem in designing this device was accommodating both the irregular shape of the residual limb on each leg and the peg that protrudes from the limb. The final design iteration accommodated these issues by utilizing a one-piece closed bottom and a pressure seal. This pressure seal utilizes a tough rubber outer layer along with a deformable silicone inner layer and an outer sleeve to integrate with the rest of the patient’s limb. A hole at the bottom of the rubber layer will allow the peg to sit inside the cover while the silicone layer will deform against the irregular topography of the leg, creating a seal held in place by the friction between the osseointegration peg and the socket, as well as the friction of the attached waterproof sleeve (attached via a strong waterproof epoxy and overlaid on the outside as to not create a seal that could compromise the waterproofing of the device) against the patient's skin on their upper limb. Utilizing these design characteristics allowed for a suitable waterproof cover for amputee patients.