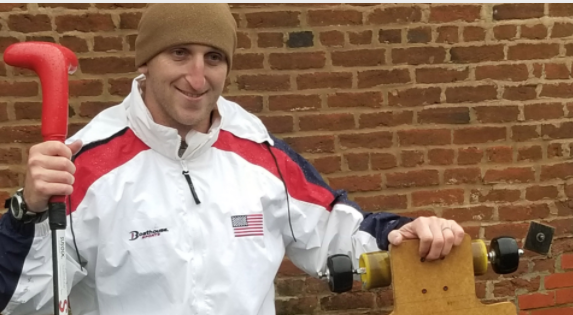 QL+ Challenger, Rob Jones is a double, above-the-knee amputee and athlete that is committed to pushing himself past any obstacle. When he deployed to Afghanistan in 2010, an IED exploded, and he lost both of his legs.  Rob won a bronze medal in the 2012 Paralympics as a tandem rower, ran 31 marathons in 31 days in 31 different cities, and he has also cycled across the United States of America.  QL+ students from Virginia Tech designed and built an adaptive SpikeBoard® that will allow him to Stand Up Spike (SUS) without assistance. SUS is “Core Out Your Door,” which is a stroke that focuses on the abdominal muscles joined with consistent spiking technique, similar to Nordic Cross Country Skiing.

What equipment is needed?
First and foremost an athlete needs a SkateBoard Spike. Secondly, SpikeBoarding and Stand Up Spike athletes require a skateboard optimized for these sports. A “SpikeBoard” has very specific characteristics unlike those for longboarding or skateboarding. You are not going to have a successful time SpikeBoarding or Stand Up Spiking without a SpikeBoard. The SpikeBoard needs to serve as a stable platform upon which an athlete will physically work hard generating forward propulsion under all manner of weather and pavement conditions. Obvious characteristics of SpikeBoards are: width and length sufficient to switch stance at high speeds and extreme duress; fenders to protect the feet; and, spike tips for wheel contact plus the capability to keep water, slush, sand and gravel off the athlete;  the size being capable of using 85 mm wheels; and, a full three-inch ‘drop profile’ for stability switch drifting and disc brakes.  Helmet and wrist guards are ALWAYS worn.  During athletic engagement the clothing attire will be the same used in inline skating and performance roadbicycle riding and racing.  All clothing may be used for commuting.  Beginners are advised to have knee and elbow protection as well as seek certified instruction.
Where can the you SpikeBoard?
Wherever you can inline roller skate and road cycle you can go SpikeBoarding and Stand Up Spiking.
Is it difficult to learn?
All sports and worthwhile activities present challenges requiring learning and a dedication to becoming a student. SpikeBoarding and SUS are no different. SpikeBoarding and SUS sports engage strength, endurance and bilateral balance mechanisms, best of all they are fun! The innovation of SpikeBoarding and SUS were made to deliver a high degree of fun while creating supremely fit athletes.
What muscle groups do you use when SUS and SpikeBoarding ?
What muscle groups are used in gymnastics or swimming? All of them! There in lie the beauty of these full body recreations having transport function as well. Name a muscle group being used in gymnastics or swimming and SpikeBoarding and SUS are engaging them constantly as well. Most importantly, all the power will generate from the core and the back and extend out via the legs and arms, hands and feet. All the cardiovascular muscles are fully engaged as well. The balance mechanisms are being challenged and asked to adapt bilaterally constantly.
Who invented the sport?
Enrique Cubillo innovated SpikeBoarding and has set world records in Stand Up Spiking up the biggest summits in USA.

Tell us more about the inventor’s background.
Cubillo is an endurance athlete that raced bicycles out of NYC and grew weary of extremely cold winters on training on a bicycle.  He suffered from Raynaud’s Syndrome ( poor circulation in the toes and fingers)  He also became concerned as he aged into his master years regarding the lopsided fitness cycling alone was providing. SpikeBoarding is a very warm sport, it generates heat very quickly even in the most extreme cold and the sport of weight bearing yet gentle on the joints.
What lead him to invent the sport?
The “a ha” moment arrived for Cubillo while watching World Cup roller ski racing up 7 km climbs.
If roller skis were racing up hills then so too could one board using one shaft he thought.
SpikeBoarding was innovated in 2010, the initial training and development occurred out of New York City’s Central Park. Voted one of the best places to cross country roller ski in the world by the USA cross country skiing community. Although Cubillo had limited cross country roller skiing exposure he realized that by modifying the ski pole and connecting the skateboard kick (lower body) kinetics to the cross country skiing poling action (upper body) kinetics, this would produce a full body propulsion stroke as beneficial and powerful as the ancient diagonal stride stroke of cross country skiing. Diagonal stride stroke is used during all NCAA, Olympic and Word Cup racing events. This is how the CXC, ICXC and SUS strokes came to be made.  All NCAA, Olympic and Word Cup cross country skiers, roller ski 70% of the year and they all focus on going up hills as fast as possible. Finally, one board, with one shaft, would begin to perform with equal performance to roller skis inside the endurance sport racing theater. The skateboard, would once and for all, be logically and with the highest performing kinetics ever made, taken up the biggest paved mountains in the USA.
How did you meet QL+ Challenger Rob Jones and how did the idea of an adaptive SpikeBoard come about?
The SUSOIX company became aware of Rob Jones via an online search of extraordinary athletes.  All endurance race sports have adaptive performance.  SpikeBoarding and Stand Up Spike will be no different. We thought Rob Jones would be the perfect athlete to begin their adaptive history and we were right!
SUSOIX was seeking athletes who were visionary.  Rob Jones’s resume fit that bill and more, so we reached out and happily we heard right back from him with an affirmative confirmation to collaborate.

What made Rob’s SpikeBoard different from standard SpikeBoards?
Rob is an adaptive athlete requiring modification so as to not allow for the board to roll backwards while traveling uphills. The Virginia Tech, QLPlus student team achieved this requirement very well.  He also requires a significantly altered top deck that is pan flat unlike a standard SUSOIX concaved SpikeBoard.
Why did it have to be customized?
At this time SUSOIX has not manufactured SpikeBoards for adaptive athletes.  SUSOIX is appreciative of the extraordinary leadership QL Plus and Rob Jones played with the initial engagement of Adaptive SpikeBoarding and Stand Up Spike history. We hope many more Veterans and student engineers will follow.  The record books are waiting to be filled.
Check out the work QL+ Students did to improve Rob's quality of life:  https://youtu.be/ExpTcq7fu0o
https://youtu.be/iXaTkWCo_oM
How will this adaptive SpikeBoard improve Rob’s quality of life?
How will SpikeBoarding and SUS help everyone’s quality of life? Spike hard, spike often! The practice of SpikeBoarding, The Sport of Balanced Strength and SUS practice, Core Out Your Door, are very fun and make you extremely happy. Mentally and physically the satisfaction of full body engagement along with a balance challenge are unmatched by any other sport that recreates and has dual function to serve as local transportation over an entire life span.  These are transport sports. Going point to point for work outs no matter the distance is transformative and meditative. The sense of well being and accomplishment on a daily basis is very satisfactory. These sports are quite handy for anyone and or any group of people that do them together socially. The allow for socialization during the activity. We certainly hope as well that Rob and all SpikeMasters (those leading the vanguard of SUS and SpikeBoarding incubation) will feel a great deal of pride and usefulness in helping others understand and begin these progressive sports that help make the planet proud.

The SUSOIX company has put up prize for men tough enough to dedicate to SUS mountain racing. Presently there is an $8000 Stand Up Spike King Of Mountain Challenge. SUSOIX is offering all Veterans generous discounts on gear and coaching at this time.  Qualification and invitation to events are mandatory. Contact info@spikeboarding.com on how to begin practice towards completion.
https://www.youtube.com/watch?v=yHWf9ftkEts